Recycle Yes, but do it efficiently !

Every 40 tonne load of used nets that gets transported from Cornwall by road over to the continent for recycling costs the planet somewhere over 400 gallons of diesel.

That is not an argument against recycling, its still more efficient than using the material only once, but it clearly demonstrates that the current system could be far more efficient.

There are currently two large net recyclers in Europe. One at the northern tip of Denmark and one in Slovenia.

The Danish plant only recycles plastics from nets made of PolyEthylene (sometimes known as PE) for the good reason that they are the nets that the Danish fishing fleet uses the most, and Denmark has one of the most progressive stances recycling both domestic and industrial wastes. The Danish fleet is focussed on trawling the busy North Sea and Baltic, and mainly to feed the fish meal and oil industries rather than for Direct Human Consumption (DHC as it is known). The simple way to understand that is that DHC fisheries are your fish & chips while ‘industrial’ fisheries never see the plate but instead are used in animal feed and similar processes.

As a result the nets used have to be pretty robust, thicker and longer lasting than many of those used in South West England for example.

The plant is (by the AA route finder) around 1,095 miles from Newlyn Harbour.

The plant in Slovenia only takes nets made of Nylon 6 (otherwise known as PolyAmide 6 or PA6). These come in many shapes and sizes and are used all over Europe and beyond, both in capture fishing and in aquaculture. Indeed the Slovenian plant takes material from as far apart as the North of Norway, across the Mediterranean and through to the Pacific Basin.

The plant combines those nets with used carpets and carpet wastes, in a chemical process known as depolymerisation, and respins them as ‘good as new’ nylon thread. Its a really good, proven industrial-scale process, but it does require a large scale chemical plant to be economic.

The plant is 1,240 miles from Newlyn Harbour. 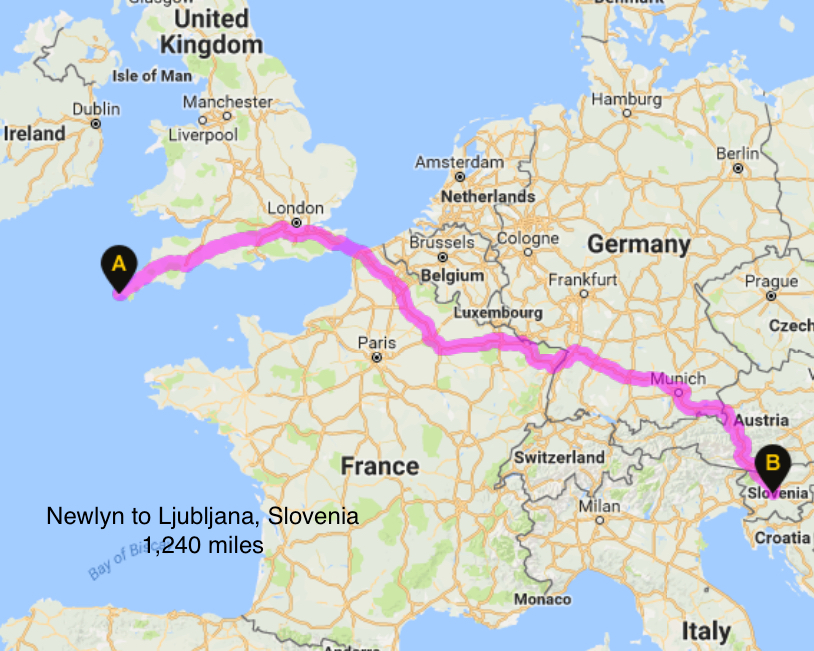 Combined these two plants have the capacity to take most types of net waste arising from fisheries around Europe, but their scale and location impose a logistical cost for every region using them. For relatively small and remote fisheries such as Cornwall, or indeed anywhere along the west coast of Europe, that cost is significant, both in terms of an up-front expense and in terms of an off-set environmental cost of the fuel and traffic imposed by it but dispersed along the transport route.

Instead we want to make sure that old fashioned principles of thrift and cleanliness combine with throughly modern environmental and social conscience. We don’t just want to squeeze extra value out of the old nets, we want to do it in a way that does the maximum good for people, the environment and the economy all at the same time.

This website uses cookies to improve your experience while you navigate through the website. Out of these, the cookies that are categorized as necessary are stored on your browser as they are essential for the working of basic functionalities of the website. We also use third-party cookies that help us analyze and understand how you use this website. These cookies will be stored in your browser only with your consent. You also have the option to opt-out of these cookies. But opting out of some of these cookies may affect your browsing experience.
Necessary Always Enabled
Necessary cookies are absolutely essential for the website to function properly. This category only includes cookies that ensures basic functionalities and security features of the website. These cookies do not store any personal information.
Non-necessary
Any cookies that may not be particularly necessary for the website to function and is used specifically to collect user personal data via analytics, ads, other embedded contents are termed as non-necessary cookies. It is mandatory to procure user consent prior to running these cookies on your website.
SAVE & ACCEPT